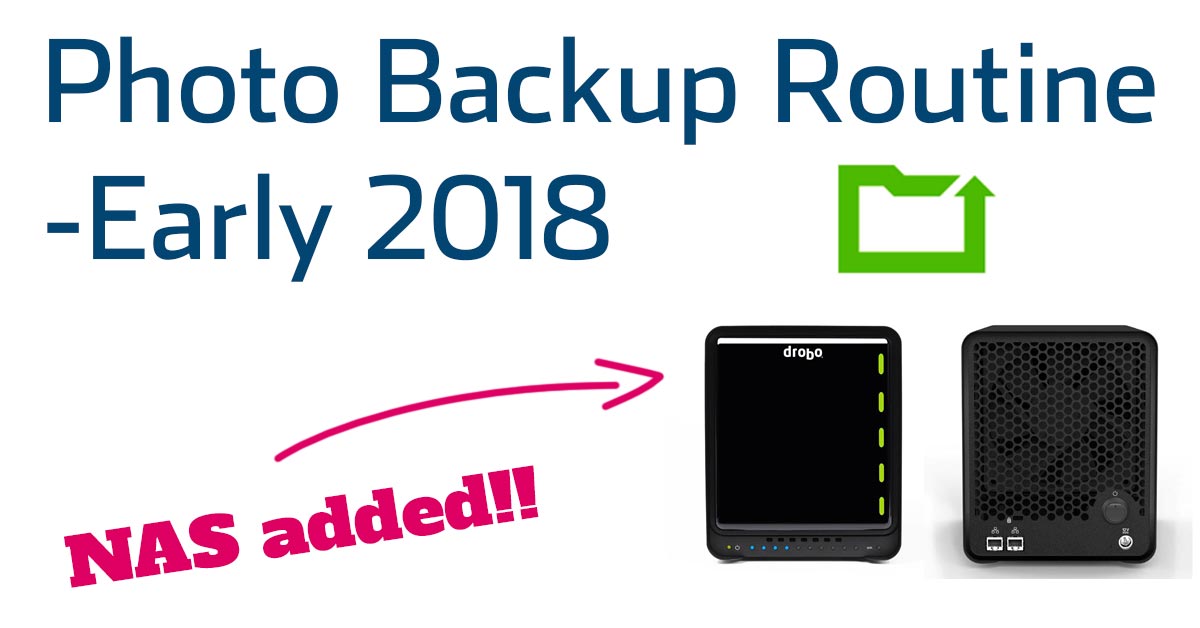 I started this particular series of posts back in 2015 by detailing my photography backup routine and outlining some of the basic strategies for a safe and redundant backup system. If you’re uncertain about the basics, you should start with that post first and then work through the full series which you can find here.

I write this series because I want to draw attention to the importance of backing up your photos. Once again, last month one of my friends had a hard drive failure and lost most of the photos she had taken in 2017 because she didn’t take basic precautions. The photos she lost include incredible images of the total solar eclipse that took place last year. I can only imagine how that must feel 🙁 Please take this stuff seriously, folks. I’m sick of hearing stories like her one.

The last entry for this series was the “Mid 2017” update where the biggest change was switching my primary storage device to the newly announced Thunderbolt 3 Drobo, the 5D3. My Drobo 5D3 has been running solidly for the past 6 months now, and I’m very happy with it.

What I do want to talk about briefly, is the experience I had with the hard drives that are inside the Drobo because I learnt some lessons here. I purchased an empty Dorbo 5D3 and decided to populate it with 4x 8TB HGST NAS drives. When I did this, I wasn’t quite getting the performance I was hoping for. I spoke to Drobo’s technicians and they were helpful, even going so far as to buy some of the same drives to test them and see if they could see the same issues. WOW!

It seemed that maybe one of my four drives was faulty in some way, but it was hard to pin-point which one it was. I tried to talk to customer support at HGST, who it turns out is a Western Digital subsidiary. After calling the number on their website, a guy passed me off to a call centre which seemed to be in India. Now, I’ve dealt with my fair share of call centres in the past, but this one was ridiculous. I have never heard such a noisy environment and it felt like I was listening in on ten different calls at the same time. Not only that, but every time the support tech asked what drives I had, and I said HGST, he would say “I’m sorry but you have called Western Digital”. I tried explaining that HGST is owned by Western Digital, and even had a go at explaining this to his supervisor, but I literally got nowhere with their lack of knowledge, and the language barrier.

It was the single most infuriating customer service experience I’ve ever had. Are you listening HGST/Western Digital?  Your own support team doesn’t even know what brands you own, or how to support them.

So I ended up returning the drives to B&H Photo, who graciously took them back even though I had thrown away the original boxes and packaging. I lost a 15% restocking fee for that, but it seems fair. I was just glad to return them and buy something different.

At the advice of the technicians at Drobo, I purchased Seagate Ironwolf drives instead. When they arrived there was a support phone number on the box and just out of curiosity I called it one night at about 3am. It rang twice, and a friendly voice answered – “This is Dave, how can I help you?”. I was so shocked at how easy it was to get hold of someone, compared to Western Digital, that I actually quizzed the guy for a minute. “Yes Sir, we’re here 24/7 to help you. Just give me a call any time.”

Now THAT is how it should be done. Thank you Seagate.

So now my main Drobo 5D3 has 4 x 8TB Seagate Ironwolf drives in it, and they’re working great.

Adding a Drobo 5N2 To the Mix

If you’ve been following this series of posts then you’ll know that I always duplicate my primary drive every night to a second Drobo. In the last post, I was duplicating my 5D3 Drobo to an older Drobo 5D using Carbon Copy Cloner. In the second half of 2017 I noticed that Drobo were running a photo contest to win a 5-series Drobo of your choice, and since I’ve always wanted a Drobo 5N2 as well, I entered… and won! The subject matter of the photo contest was adventure photography, which as you may know, is right up my alley!

A few weeks later, a Drobo 5N2 showed up at my office and I could not have been more stoked! The 5N2 is a NAS drive, meaning you can access it over a network instead of being connected directly to it with a cable. Not only does that mean you can connect to it over a network when you’re at your own home/office, but it also means you can log into it remotely from anywhere else in the world.

I have been threatening to add a NAS to my system for a few years because it would give me that ability to access any archive photo from anywhere. Once the 5N2 arrived, I copied all the data off my backup Drobo 5D onto the new 5N2 and immediately began using that as my backup drive. Now I have a Drobo 5D3 which is connected to my computer directly as a primary drive, and this is mirrored every night to my 5N2 using Carbon Copy Cloner. Whenever I’m away from my office, the 5N2 stays powered on, and I can log into it remotely using a browser, or the Drobo iPhone app when I need to download a file.

The setup process for the NAS 5N2 was incredibly easy but the one thing you have to be aware of is that you can’t connect it to your computer directly, so any files need to be transferred to it over the network. When you have many terabytes of data this can take some time for that initial copy.

I also found that when I was setting up the Carbon Copy Cloner task to mirror the Drobo 5D3 to the 5N2 NAS drive every night, I needed to check the little box in the troubleshooting section that says “Don’t preserve extended attributes”. I’m not entirely sure what this does, but unless you do that, you’ll find that the nightly copy task is glacially slow.

With these new changes in place, here’s a rundown on my current backup routine.

Photos are downloaded from memory cards using Photo Mechanic and placed into my primary photo archive on the Drobo 5D3. The 5D3 is a redundant array using Drobo’s BeyondRaid technology, so if a drive fails in the 5D3, I can simply slot in a replacement and no data is lost. This is my first layer of redundancy.

This is the biggest change for my setup for 2018. Every night, Carbon Copy Cloner mirrors the primary storage onto the Drobo 5N2 NAS. Since this unit only gets used as a backup, and never worked from, I’m not worried that it is the slower to access than my 5D3 (network isn’t as fast as Thunderbolt). Again, since it has redundancy built into it, a drive can fail and no data is lost. Even if a drive fails, it can still perform its backup duties that night whilst simultaneously rebuilding the replacement drive that you put into it. Even when a drive fails in a Drobo, you still have continued access to all your files during the rebuild process.

The primary reason for having two Drobos containing the same data is to protect against hardware failure of the Dobo itself. If the Drobo 5D3 unit fails, even if all the drives are fine inside it, this would knock me out of action for several days while warranties or replacements are organized. I can’t afford for that to happen, and I learnt this lesson the hard way many years ago. It also protects against file corruption because a RAID (or in this case a BeyondRaid system) is not a backup. Period. Read this is you don’t know what I’m talking about.

The fact that the 5N2 is a NAS drive also allows me to access that files on it from anywhere in the world using the Drobo iPhone app, or by logging into is using a web browser. If a client needs a file from my archive, I can even give them temporary access to the file so that they can pull it remotely from the Drobo. All of this can be handled from the phone app while I’m away. Amazing stuff.

This additional Drobo 5D lives at a friend’s house. After a big job, or several weeks of shooting, I bring it home and plug it in to the computer. Carbon Copy Cloner immediately jumps into action and mirrors the Primary Photo Storage 5D3 onto this 5D, then it goes back to my friend’s house.

This protects agains fire, flood or theft of the Primary Storage 5D3 from my office location.

CrashPlan backs up my internal drive to the cloud. This protects agains fire, flood or theft of my Time Machine drive.

Time Machine is great for getting back a single file that you may have accidentally deleted, but if your entire internal drive dies, it takes time to replace the drive and get back up and running. I use Carbon Copy Cloner to occasionally create a bootable clone of my internal drive onto a G-Technology ev Raw drive. If my internal Macbook Pro drive fails, which has happened before, I can instantly boot a mirror of my computer from the clone and be back up and working in a couple of minutes. Of course the internal drive would still need to be replaced, but this means I can take the time to do it at a convenient moment.

This setup has me covered for some pretty serious hardware and hard drive failures. Even if a drive fails in my primary Drobo, and a second drive fails in the same Drobo before it is rebuilt with a new disk which would cause a total loss of data, I still have a redundant copy on site in the backup Drobo 5D AND another redundant copy offsite in the second 5D. In other words, I could lose two drives from one unit simultaneously, and my office could go up in smoke ten minutes later and I’d still be fine, even if a third drive then failed in the offsite copy. It’s a pretty solid setup!

On top of that, all my day-to-day personal and business files are backed up onsite and offsite with Time Machine and CrashPlan.

I haven’t changed this setup in a few years. When I travel I have a pair of G-Tech ev Raw drives labelled Photo 1 and Photo 2. Images get copied onto both drives during memory card ingestion with Photo Mechanic. The drives are stored in different locations and whenever possible I try not to format memory cards until I’m back home, leaving me with three copies of my images while I’m away. If I get that once-in-a-lifetime shot, I stick it on Dropbox too.