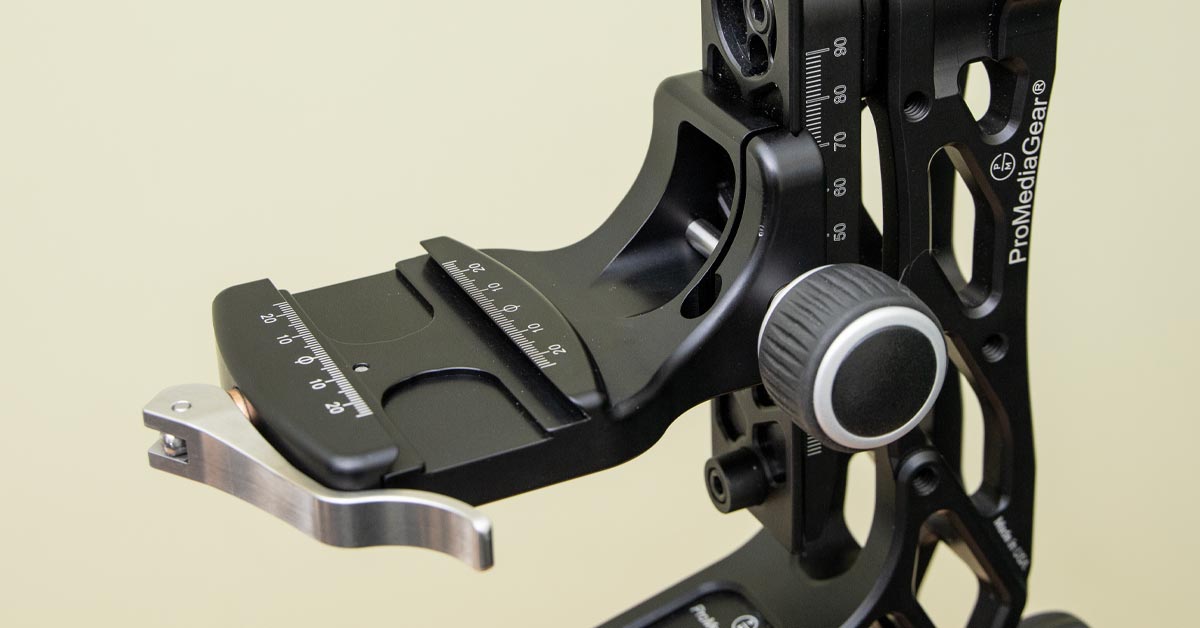 Really Right Stuff makes two different gimbal heads: The PG-02 and the FG-02. The former is a more traditional style of gimbal head that uses high-quality bearings in its rotational mechanism, while the latter is a fluid gimbal that utilizes fluid cartridges more often found in video heads. Both of these gimbals have the option to be delivered with either a side mount or a cradle mount. See photos below if you are not familiar with the immediate differences. Pros and cons of the two styles are discussed in my gimbal guide.

The right-angled lever-release clamp that makes up the cradle part of the gimbal is available as an individual item, sold under the name Really Right Suff PG-CC Cradle Clamp and costing $190.

Just as Really Right Stuff do, many other gimbal manufacturers use an Arca-Swiss standard width dovetail rail for the vertical part of the gimbal cradle, and this means you can use the RRS Cradle Clamp as an upgrade to many different gimbals such as the Wimberley WH-200 and the ProMediaGear Katana and Katana Junior.

I use the word “upgrade” very deliberately here because I think the experience of using a lever-release clamp on a gimbal is far superior to using a screw-lock clamp. While you are wrestling with a giant super-telephoto lens, trying to balance that $15,000 package on a plate with one hand, it just seems awkward to have to tighten a screw-lock clamp with several rotations of a knob. Closing a lever-release clamp is faster, considerably easier with gloves on, easier in cold weather and also much easier if you lack manual dexterity due to arthritis. Strangely, many gimbal manufacturers do not make lever-release clamps at all, and that is why those that want one, will most likely look towards the Really Right Stuff PG-CC. In fact, I don’t currently know of another option on the market.

As with all Really Right Stuff products, you will pay a pretty penny to have this in your camera bag, but when you get it in your hands you feel the usual RRS workmanship, and you’ll also note that it was machined out of one solid block of aluminum. In this case, the right-angled design probably leads to some necessary machining wastage, attributing to the relatively high price. Note that one of their standard lever-release clamps costs $120.

The lever-release action is incredibly smooth. Having been an RRS user for well over a decade, I can attest to the fact that it will stay that way for many years to come. The rubber-coated knob on the vertical clamp is also nice and large, making it easy to operate in the cold with gloves on.

The only other design point worthy of slight note is the fact that the clamp is entirely unbranded by RRS logos. Perhaps that’s a positive thing for you, perhaps it’s not. Personally, I think it’s a strange omission given that all their other clamps do contain the logo, and I also think that many people who use RRS gear are proud of it and would like it to be known.

Upgrading Your Gimbal Head to the RRS Cradle Clamp

As mentioned earlier, the vertical arm of the gimbal cradle needs to be a standard width Arca dovetail in order to make use of the RRS PG-CC upgrade. This certainly includes Wimberley gimbals such as the WH-200 and all ProMediaGear gimbals. I believe it also includes gimbals from Benro, Movo, Oben, Kirk and Sirui as well. If you have one of these gimbals and have made the upgrade, please leave a comment below to confirm and help everyone out.

One gimbal that it certainly does NOT include, is the Gitzo Fluid Gimbal. For some unknown reason, Gitzo decided to use a wider non-standard dovetail width for the vertical part of their gimbal. Gitzo gimbal users are therefore stuck with the screw-lock cradle clamp that comes with the Fluid Gimbal.

If you currently have a side mount gimbal you can easily upgrade to using the RRS PG-CC Cradle Clamp by simply buying the clamp and any generic multi-purpose Arca-Swiss dovetail rail. In the photo below you can see this demonstrated with a side mount version of the RRS PG-02 gimbal, converted to cradle mount with the PG-CC cradle and a basic dovetail rail from ProMediaGear that I had lying around. This is actually a nice way to do things because it makes it easy to switch back and forth between side mount and cradle mount.