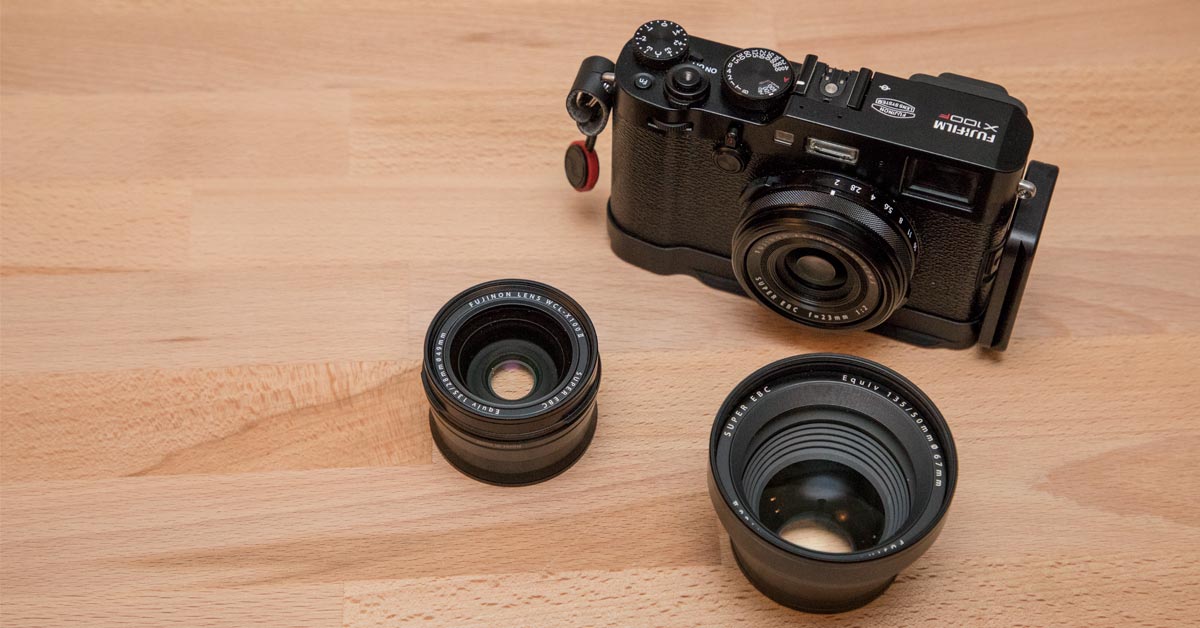 The Fuji X100 series has been incredibly popular since the very first version and I was excited to buy my own X100F as soon as it was announced. The camera has a fixed 23mm f/2 lens on it that delivers an angle of view that’s equivalent to a 35mm lens on a full frame camera, but Fuji have been selling two conversion lenses for a number of years. Alongside the X100F launch, they also launched new “mark II” versions of these 28mm and 50mm conversion lenses.

The difference between the original TCL-x100/WCL-X100 and the new mark II versions of the conversion lenses is very minor. Optically they are identical to the previous versions, with the only difference being a small magnet in the base of the lens that allows the Fuji X100F or X100V to automatically detect the usage of one of the conversion lenses. With the original lenses you needed to manually select an option in the menu to tell the X100 that you were using a conversion lens. This then compensated for distortion and adjusted things like frame lines in the OVF and distance readings in the EVF. If you use these Mark II lenses on the X100F, and any subsequent X100s that were released after the X100F like the X100V, the camera will automatically apply that setting for you.

You can still use these Mark II lenses on older X100 models such as the X100T and X100S, but they lack the ability to detect that magnet, so you still need to change the menu setting to apply it. What this means is that there is absolutely no reason at all to upgrade from the previous conversion lens versions unless you have an X100F or X100V and want that automated lens detection. If you have the older cameras, there will be no difference at all to your images or functionality.

The photos in this section tell much of the story here. The 28mm lens is actually the smaller of the two, which might catch a few people by surprise, so pay attention to that because it’s very important in the overall review of these. The 50mm lens is gigantic, I really couldn’t believe it when I got it out of the box, it’s almost comically large on the little X100 and it totally unbalances the camera to the point where I just didn’t want to use it. The 28mm doesn’t affect things quite so much, but it does turn the camera into something which you can no longer fit into a large jacket pocket, as you can when it’s just the native fixed lens.

In order to attach them to the camera, you first have to unscrew a small vanity ring which is covering up the thread on the front of the X100’s fixed lens. Once that is off, you simply screw the conversion lens to the front of the camera. The X100’s fixed lens has an f/2 aperture, and the great thing about these converters is that they maintain that aperture, unlike regular teleconverters (the ones that sit between lens and camera body), which typically cause a 1-2 stop reduction in light transmission to the sensor.

If you’re using the X100 filter adapter then you’ll need to unscrew that from the camera’s fixed lens in order to attach the converter. The X100 filter adapter allows you to use 49mm threaded filters on the camera, and there’s also a 49mm thread on the 28mm conversion lens so you can continue to use the same filters once you have swapped them from camera to conversion lens. Unfortunately, with the 50mm conversion lens being so big, its filter thread size jumps up to 67mm which means you’ll have to carry a second set of filters with you if you want to use them on that longer focal length – definitely a pain in the ass.

I have to award Fuji excellent marks in this area because both lenses exceeded my expectations in normal usage. I was particularly concerned about the magnification that’s present in the 50mm lens, because this will also magnify any flaws in the original optics, but thankfully it all worked rather well. The only area of disappointment for me was in the close focus images. The X100 lens has always been pretty weak at minimum focus distance anyway, and things tend to lose sharpness and get a little “foggy” looking around the edges. The same can definitely be said when used with the converters, but to an even greater extent unfortunately. Since the converters don’t alter the minimum focus distance anyway, I can’t imagine anyone will be buying them for macro purposes, so it’s unlikely to be a huge issue, it’s just something to keep in mind whilst shooting.

Overall though, I was pleasantly surprised by their optical quality. Most people would be able to spot the “converted” images in their image library simply by the different angle of view, but if you couldn’t you’d be really hard pushed to pick them out without examining the photo’s EXIF data and that’s pretty impressive.

The images below give a good indication of the change to angle of view when using the converters, with 35mm equivalent focal length noted in the captions.

I have been so excited about my Fuji X100F since the day I got it (and now lust over the X100V), so naturally I was also excited to investigate these conversion lenses, as I thought that might add even more to my already beloved camera. I was really impressed by the optical quality of the lenses, and only noticed some softening of the images when they were used at the absolute minimum focus distance, which has never been a strong point for the X100 series anyway. In normal shooting, you really can’t tell that these are being used, apart from the obvious change in angle of view that comes from the wider 28mm or the longer 50mm.

The difference really comes down to the usability of the camera, and for me this is where my feelings are a mixed bag. The 50mm conversion lens is gigantic, and I really felt that it killed the soul of the camera. The unique thing about the little X100 series cameras is that they do seem to have some soul to them, they just make you smile when you use them, and they invite creativity and experimentation. With the 50mm converter attached, it lost this because it just became unwieldy to use, and so much less portable. You could try and argue that you can remove the lens, but the screw-on method of attachment, and need to remove filter rings and change filter sizes is all just too much. It eats into the experience of using the camera, and you might as well just buy an XT-20 and a Fuji 35mm f/2 WR lens which would give you a 53mm equivalent in a smaller and cheaper package. If 50mm is a focal length you love to use, the Fuji X100V, or any other variant of the X100 product line with this converter is simply not the way to go, get the interchangeable X-Series model with the gorgeous, small, 35mm f/2 instead.

On the other hand, the 28mm conversion lens is a lot nicer to use. I still found that the inconvenience of the attachment method meant that when I put the lens on, I kept it on all day, but at least it was a comfortable size to use. It’s slightly less portable with the longer lens protrusion, but it’s not nearly as restrictive as the 50mm one. For me, I still prefer to shoot with the “naked” camera and it’s 35mm equivalent lens, but if you’re someone that really loves the 28mm field of view then I think you’ll be happy with this one. By the numbers, 35mm to 28mm doesn’t seem like all that much, but it does make significant compositional changes when you’re working with landscapes, which is the scenario I would most recommend for that setup.