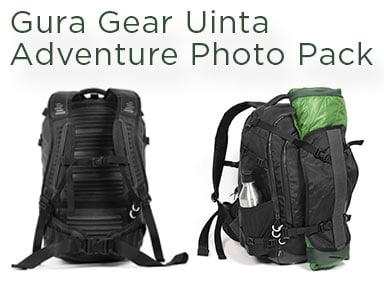 I have now published an extensive hands-on review of this backpack so you are probably going to want to go HERE instead and check that page out!

A Backpack For Adventure Photographers

Gura Gear, the folks that brought you the popular Battaflae pack, have just launched a new pack called the Uinta and it’s shipping today! This new pack is pegged as a pack for adventure photographers and it’s got a couple of unique features going on that I don’t think I’ve seen before.  Three seperate access points for your gear and an interesting solution to the question of  ‘Where should I put my water bladder?’

This has long been the best way to enable outdoor and adventure photographers to carry their gear.  Everyone has slightly different requirements and different ratios of camera gear to ‘other gear’.  A modular system means that if you only take a camera body and a couple of lenses then you can use a small module and save the rest of the bag’s space things like food, extra clothing and safety gear.  The Uinta pack actually takes this modular system one step further in that the bag itself is internally divided and so is the back panel access.  Much like with the MindShift Rotation 180 it means that you can totally segregate photo gear from all your other things.  The back panel of the Uinta has a separate zip at the bottom that allows access to the lower compartment.  More photos of that lower down the page.

Currently there are small and medium sized modules but you’d have to assume that a large one would also be on the way  that takes up the full internal volume and allows longer lenses up to something like my 200-400.

Most pack manufacturers go with either a front opening system or a back panel opening.  For outdoor photography I find that back panel is a better solution because it means that when you put the bag on the ground you rest it on the front of the pack and therefore dirt, dust and moisture isn’t transferred to the harness or back panel.  In some situations though there are merits to the slightly easier access of a front panel system and so Gura Gear has simple included both on the Uinta pack which is quite unique.  Not only that, but the back panel access is split into two sections so you can have access either the top half of the pack or the bottom via different zippers. Great versatility, and as you can see from the photo below, there’s also a padded laptop sleeve that’s capable of holding up to a 17″ computer.

Smaller tripods can be attached to the side of the pack but larger tripods require an additional accessory called the THS which clips onto the front of the pack.  It looks to be a very secure way to carry the tripod, though if you have a very large tripod it’s never really ideal to hang all that weight so far from your center of gravity.  The deeper you make your pack, the more strain you’re putting on your back.  Ideally I like to carry tripods on the side of the pack as this then transfers the heavy load down through your hips a little bit better.  It would have been great for there to be a way to use the same THS system, but on the side.  Nonetheless it looks to be a very secure attachment method so at least you won’t have the tripod moving about much.

Update:  After raising these questions Gura Gear sent me a new photo which shows the tripod attached to the side.  It’s nice to have that reference and it seems that if you want to use both the bladder and carry a decent sized tripod then the best thing is to have the tripod on the side like this.  The mesh pocked seems to expand enough to acomodate pretty large feet to I think any size of tripod will work. Tall tripods might be a bit cumbersome though but I’d have to try this myself to judge.  On the Battaflae pack I find tripod attachment to be a definite weak point and this looks to be a huge improvement.

The same THS accessory has another trick up it’s sleeve.  Hydration.  You never want to put a hydration bladder directly inside your camera bag just in case it springs a leak and this is a unique solution to solving that problem.  Having said that, you are then putting even more weight out the back and making your pack even deeper.  I’m going to have to reserve final judgement until I’ve tried the pack myself, but it certainly appear that it would be awkward to use your tripod if there was also a full water bladder in the THS.

I’d say that almost everyone is going to end up getting both the medium and the small sized modules and many people want to carry a decent sized tripod so the THS accessory is really a necessity as well.  This means that the total price is $398.85 which certainly puts it in the same area as bags like the MindShift Rotation 180 Professional and the F-Stop Tilopa.  High quality, durable packs don’t come cheap in the outdoor photography market but my experience with all of these brands has been that you get what you pay for and they really do stand up to the rigours of adventurous photo missions.  If the price is a little high then you might consider the $199 MindShift Panorama pack (Review)which is a little smaller and sleeker but still offers modular camera storage and very easy access to gear via the clever Rotation 180 System.

As I mentioned quite recently in my review of the MindShift R180 Panorama, adventure and outdoor photographers are finally getting some great choices when it comes to photo packs.  For a long time photography backpacks were just not designed with adventurous missions in mind.  They were unwieldy and uncomfortable and I used to simply choose a regular hiking pack instead.  In the last few years though, companies like F-Stop, MindShift, Gura Gear and Clik Elite have given us some great choices that are far more specifically targeted to the outdoor photo crowd. I’ve used all the Gura Gear bags and I still own a Chobe shoulder bag (review) and a Battaflae pack as well.  The Gura Gear Battaflae is a pack that’s really designed to carry long lenses for nature photographers and whilst it does that very well I’ve never found it to be a comfortable pack to wear whilst hiking or doing anything overly physical.  It looks like this Uinta pack will be better in that regard and you can’t knock the materials and build of the Gura Gear packs, it’s top notch.  Hopefully at some point I’ll get to try one of these out and I’ll certainly report back to you.  I’m thinking it might be time for a big ‘outdoor photo pack shootout’ or something like that!